Sylvain Reynard has reached a whopping 30,000 followers on Twitter and to celebrate, he is cleaning house. Literally!

Giveaway is running from July 4 – August 4, 2014 and there are a TON of prizes from signed books to gift cards. Also, it IS open Internationally!! Good luck! Welcome to our stop on the Gabriel’s Redemption Blog Tour! We are beyond thrilled to bring you our 5-star review along with an interview with Sylvain Reynard himself. And scroll down to enter the amazing Rafflecopter giveaway. Enjoy!

From the author of the New York Times bestsellers Gabriel’s Rapture and Gabriel’s Inferno comes the epic conclusion to the captivating romantic trilogy.

Professor Gabriel Emerson has left his position at the University of Toronto to embark on a new life with his beloved Julianne. Together, he’s confident that they can face any challenge. And he’s eager to become a father.

But Julianne’s graduate program threatens Gabriel’s plans, as the pressures of being a student become all consuming. When she is given the honor of presenting an academic lecture at Oxford, Gabriel is forced to confront Julianne about the subject of her presentation—research that conflicts with his own. And in Oxford, several individuals from their past appear, including an old nemesis intent on humiliating Julia and exposing one of Gabriel’s darkest secrets.

In an effort to confront his remaining demons, Gabriel begins a quest to discover more about his biological parents, beginning a chain of events that has startling repercussions for himself, Julianne, and his hope of having a family.

I was thrilled when Sylvain Reynard announced that there would be a final book in the Gabriel’s Inferno Series. I could not get enough of Gabriel and Julianne and re-read both Gabriel’s Inferno and Gabriel’s Rapture several times when they were first released.

Gabriel’s Redemption, the third book in the series, is immensely satisfying and stunningly written. Even descriptions of simple acts such as eating or studying take on rich and layered meanings when written by Sylvain Reynard. And the love scenes between Gabriel and his beloved Julia took my breath away.

“In the months since their marriage, their desire had not abated, nor had the sweetness of their coupling. All speech melted into motion and touch and the bliss of physical love.”

This story takes place shortly after their marriage and shows the struggles that Gabriel and Julia — like most couples — must go through while building a life together. Will Gabriel overcome the guilt he feels about his past? Will Julia be able to reconcile Gabriel’s burning desire to start a family with her own educational ambitions? She, too, feels guilt and conflicting emotions over Gabriel’s plans for their future together.

“Gabriel was a consuming fire. His passion, his desires, all seemed to overtake the desires of those around him. He’d told her once that she was the only woman who’d ever said no to him. He was probably correct.”

Sylvain Reynard weaves in many Old Testament references which enrich the love story between Gabriel and Julia. Nicely balanced with the heavy themes of love, forgiveness and redemption are the funny comments by the Snarky Narrator, which lend an air of levity to the book.

The secondary characters that I love also make appearances in this book. Professor Picton is a strong influence on Julia and helps to guide her in making certain life-altering decisions including dealing with the evil Christa, who is still out to make trouble for the Emersons. We also see a glimpse into Paul Norris’ life and the dangerous Simon and Natalie also make appearances.

Gabriel’s devotion to Julia remains unwavering and I loved reading their scenes together. He still battles with feelings of inadequacy but Julia’s goodness helps him overcome his deep-seated feelings of guilt and self-loathing.

“Almost six months into their marriage he loved her more than before, he envied the very air she breathed.”

I also loved the way in which Julia grew as a person in this book, and became much stronger in her educational studies and in dealing with her professors and others who conspire against her. She also stands up to Gabriel, who is certainly a force to be reckoned with. Gabriel, too, grows as a person as he uncovers facts about his past that help him find closure to certain events in his life and bring him some measure of peace.

“I suppose we’re all on our own spiritual journeys.”
“Some of us are further along than others.”

Sylvain Reynard did a spectacular job of concluding Julia and Gabriel’s story in this book. Once again, Sylvain delivers a richly detailed and deeply-felt story that will stay with you long after you finish the last word. I was sobbing at the sheer beauty of this book and can’t wait to read more from Sylvain Reynard.

(ARC provided by the publisher in exchange for an honest review.)

And now…we couldn’t believe our luck in snagging an interview with SR himself! With many thanks to our dear friend Mags, the Bellas posed a few questions to the author and here are the results of our interview!

Hello Book Bellas. It’s a pleasure to be with you and your readers.

Thank you. When I began writing about the Professor, I had no idea anyone would ever read my writing. Everything has been completely unexpected. One of the things I enjoy most about being a writer is interacting with readers from around the world. Through Twitter and Facebook, I regularly speak with readers in South America, Asia, Europe, Australia and New Zealand, the Mid East, and Africa. It’s like visiting the UN without leaving my desk.

Why do you think the themes of love, redemption and forgiveness have resonated so deeply with your readers?

Simply put, I think these themes represent what are most important and most essential to humanity. I don’t think I could write a novel that didn’t include these elements to some extent.

What would be the anthem of your life?

Who would play you in a biopic of your life?

A computer. It would have to be a Mac, however.

For the Bellas, there is only one Professor Gabriel O. Emerson, and that is the one and only David Gandy. Whom do you envision as Gabriel?

Many readers have told me that David Gandy is their ideal Professor. I’ve also heard from readers who prefer Henry Cavill.

When I began writing the novel, I envisioned someone like Clive Owen as the Professor. But I was told fairly early on by readers that I was wrong – that is not who the Professor is. So I’ve learned to keep my mouth shut on the issue and simply to smile at nod at whomever is suggested …

Well. We digress but let’s take a quick look at both Mr. Clive Owen and Mr. David James Gandy: Hmmm…both handsome men for sure, but Mr. Gandy will always be our beloved Professor Emerson!

We certainly agree with SR on that choice. Much as I enjoy alcohol, I need coffee.

Your supporting characters play an integral role in Gabriel and Julia’s story. Will we see any of them again in the future?

It’s possible. Readers have asked about Paul, for example. And I’m particularly fond of Katherine Picton.

But I can tell you that readers will be seeing more of the Professor. He has a cameo in my next novel, “The Raven,” which is the first in a new series. “The Raven” is a paranormal love story and readers can learn more about it here.

Many thanks to Sylvain Reynard for “sitting down” with us today! And congratulations on the amazing Gabriel’s Redemption!

I’m interested in the way literature can help us explore aspects of the human condition – particularly suffering, sex, love, faith, and redemption. My favourite stories are those in which a character takes a journey, either a physical journey to a new and exciting place, or a personal journey in which he or she learns something about himself/herself.

I’m also interested in how aesthetic elements such as art, architecture, and music can be used to tell a story or to illuminate the traits of a particular character. In my writing, I combine all of these elements with the themes of redemption, forgiveness, and the transformative power of goodness.

I try to use my platform as an author to raise awareness about the following charities: Now I Lay Me Down to Sleep Foundation, WorldVision, Alex’s Lemonade Stand, and Covenant House. For more information, see my Twitter account. 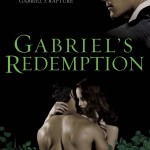 “Professor Gabriel Emerson has left his position at the University of Toronto to embark on a new life with his beloved Julianne. Together, he’s confident that they can face any challenge. And he’s eager to become a father.

But Julianne’s graduate program threatens Gabriel’s plans, as the pressures of being a student become all consuming. When she is given the honor of presenting an academic lecture at Oxford, Gabriel is forced to confront her about the subject of her presentation – research that conflicts with his own. And in Oxford, several individuals from their past appear, including an old nemesis intent on humiliating Julia and exposing one of Gabriel’s darkest secrets.

In an effort to confront his remaining demons, Gabriel begins a quest to discover more about his biological parents, beginning a chain of events that has startling repercussions for himself, Julianne, and his hope of having a family.”