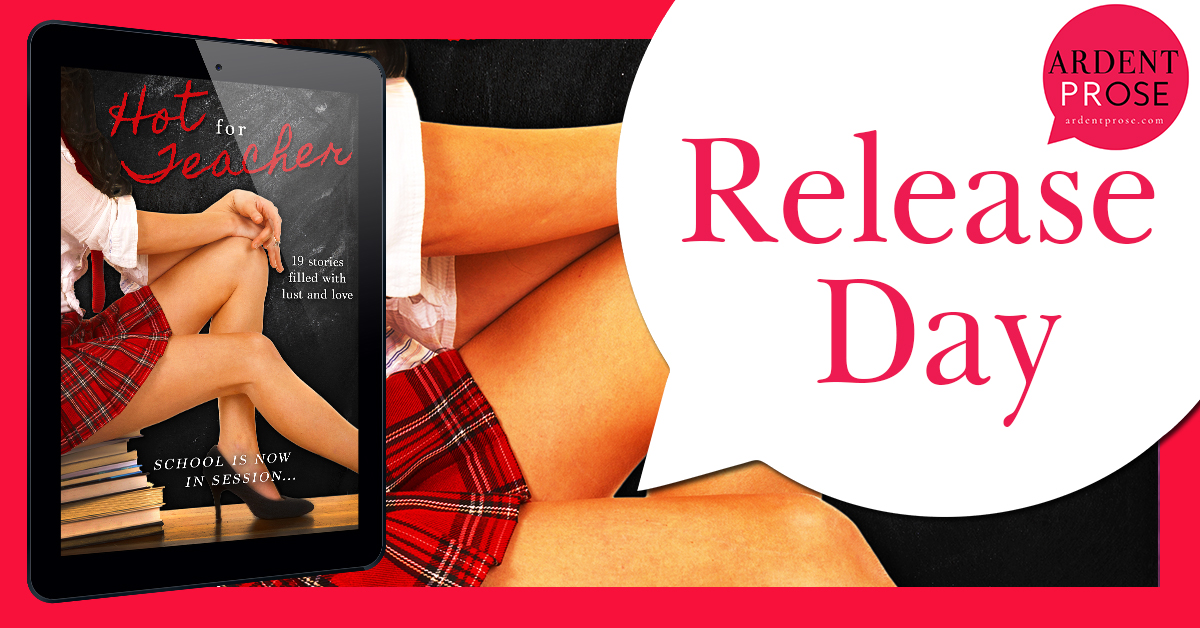 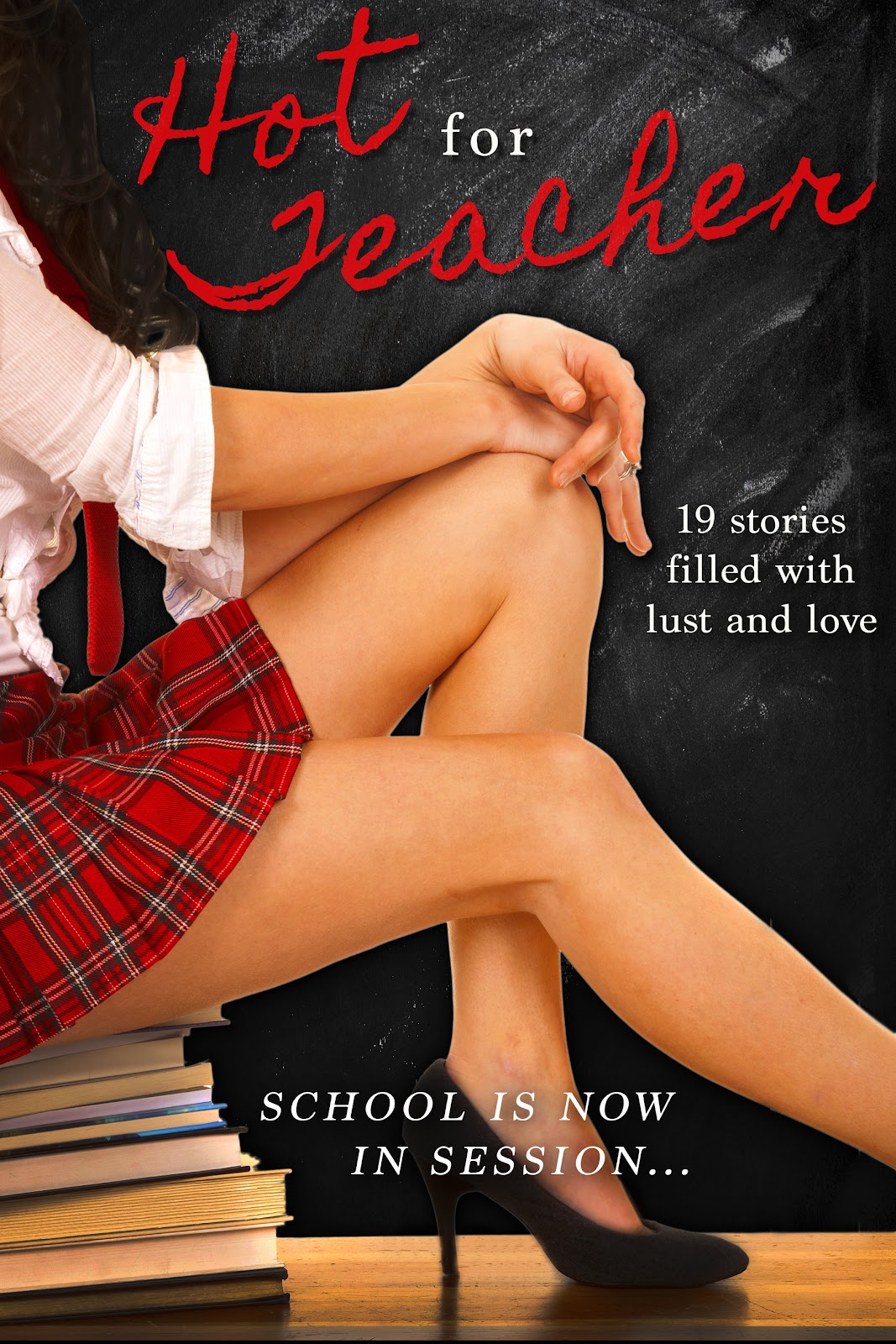 Nineteen of today’s bestselling authors…PlusNineteen tales of tempting teachers and seductive students…EqualsOne HOT anthology for an epic cause.Sexy, spicy, romantic, angsty, funny, or sweet-however you like your fantasies, these nineteen original novellas guarantee extra heat.100% of digital sales profits will go to ProLiteracy, promoting and supporting literacy programs for all ages, genders, and cultures. 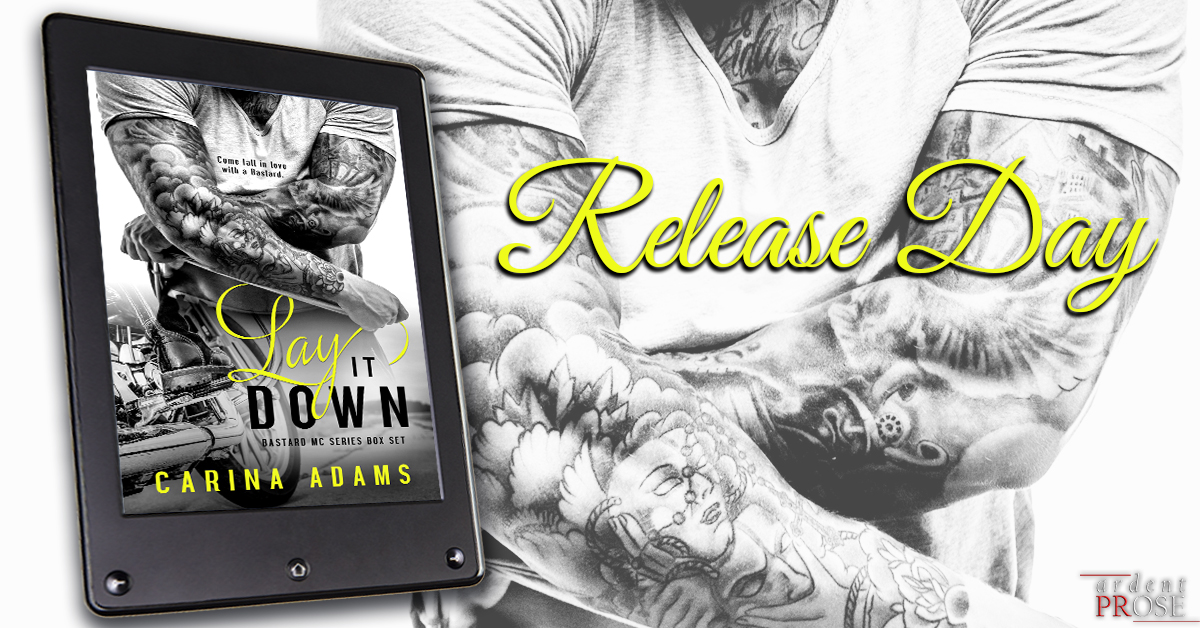 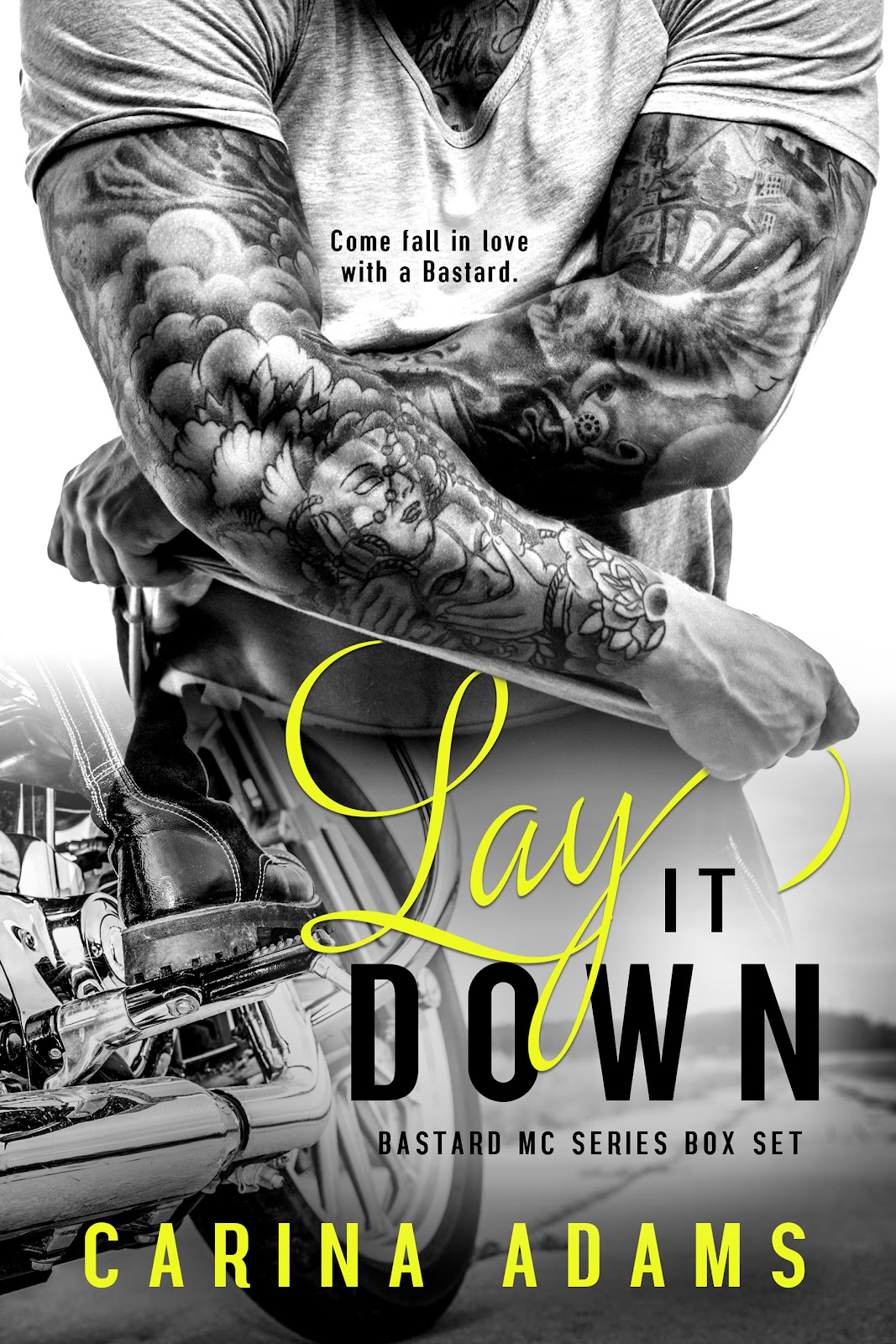 My carefully constructed, picture perfect life is crumbling around me. For the first time in fifteen years, I don’t know who I want to be.

I need to find me.

I’m done playing it safe, done caring what others think. I want wild and crazy. And, as much as I try to ignore it, I want Matt to see me as more than just his best friend.

The Bastards live in a world most don’t understand. We follow our own rules, only accountable to each other, the innocents we protect, and the people we couldn’t save. Each of us wears a mask, hiding behind a polite smile and a respectable job, covering the monsters inside. I made peace with who I was a long time ago. I have no regrets.

Jo Walker. I’m not letting her go without a fight.

“I’ve had dreams like this.” He pushed himself off the door and swaggered toward me. “Where you come here, take off all your clothes, and tease me. I always wake up before I get to touch you.”

He ran fingers along my collarbone lightly, as if to make sure I was real. The fingers trailed down my chest, between my breasts, over my stomach, and onto my hip. He stood so close that I could feel his breath on my face while he looked over every inch of me, and I fought the instinct to cover myself and hide. There was a lot more meat on my body than there had been last summer. I’d let the irritation of the divorce and the stress of losing Matty get to me, and I’d packed on an extra fifteen-ish pounds. I was curvier than I’d been in a long time, and a lot more woman than I was sure he was used to.

His eyes met mine, watching me carefully for a few minutes. “You are so fuckin’ beautiful, and you don’t even know it, do you?” His voice was low, practically a whisper. He reached out his other hand and, following the same trail slowly, ended up on my other hip. “Joes?”

He bit his bottom lip as his eyes met mine again, and I knew he was asking if I was sure I wanted this. I nodded.

He picked me up, and my back hit the wall before I even realized we’d moved. His hands skimmed down my hips, onto my ass, then to the undersides of my thighs, pulling me as close to him as I could get while he was still fully clothed. I wrapped my legs around his waist, desperate for contact. His mouth moved up my neck, his tongue drawing a line and his lips blowing on it, his beard tickling me—the combination sent shivers down my spine and made my muscles clench.

I tangled my fingers in his hair, trying to pull his head back, needing to kiss his lips. He was stronger though, and he continued his tantalizing journey—lapping, blowing, and sometimes nibbling—up to my ear and back down the front of my neck. Helpless to do anything else, I rocked my center against his jeans, the denim providing just enough friction to make me moan.

He ran the tip of his nose back up my neck, onto my face, and his mouth closed over mine, claiming me. All too soon, he pulled away, releasing me and backing up. My feet weren’t ready to hold me, and I leaned against the wall, confused.

He grinned as he looked me over once more. “Fucking amazing.” 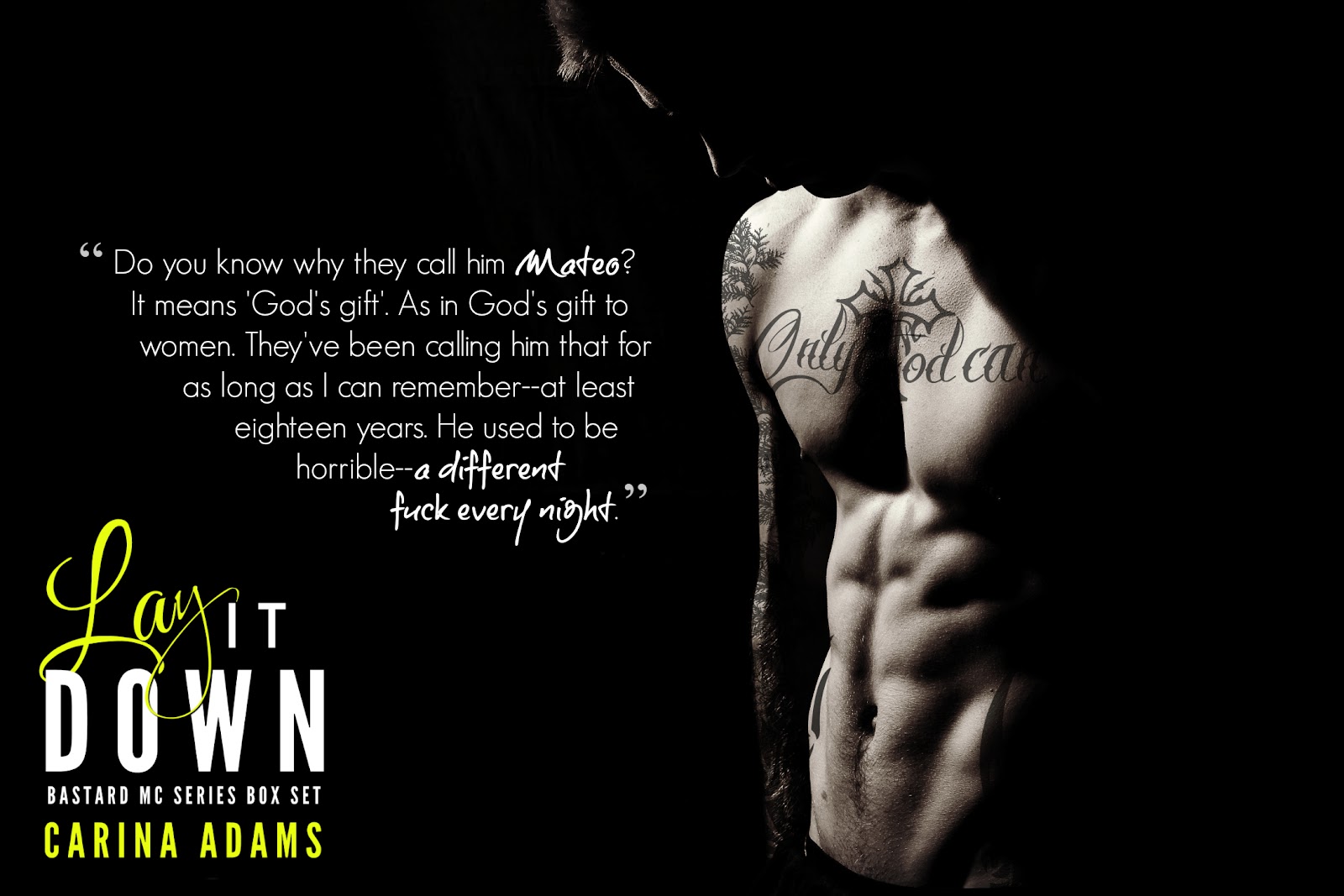 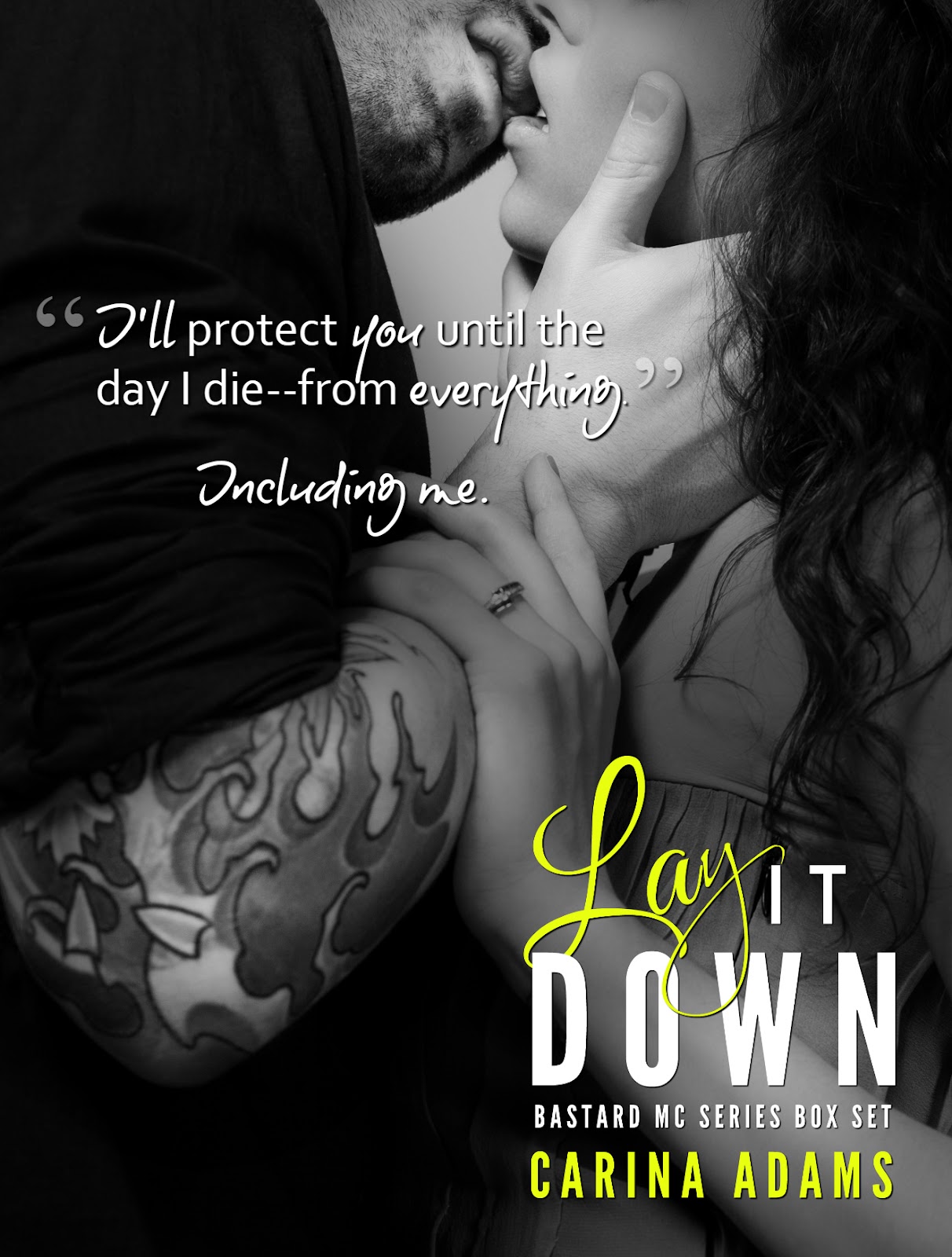 Carina Adams has been writing and creating characters for as long as she can remember, allowing her to fall in love with the next man of her dreams with every new story.

Thankfully, fate stepped in and granted her the ultimate wish – a life full of men. Carina lives in a picturesque New England town with her husband, the man who ruined the thought of all others, and two amazing sons who always keep her on her toes.

Carina received her MBA in May, but would much rather play with her imaginary friends (the voices in her head) than work her 8 to 5. When she isn’t trying to juggle being a working mom with karate and football practices, surprising her children with her sci-fi movie knowledge, or writing, you can find her with her nose pressed against her kindle, laughing with friends, or living life vicariously as her Derby Girl persona, Writers Block.

Carina is the author the of Bastards MC series and best selling Forever Red. She is currently writing Out of The Blue, the follow up to Forever Red. She loves to hear feedback from her readers, no matter what type. You can email her at: