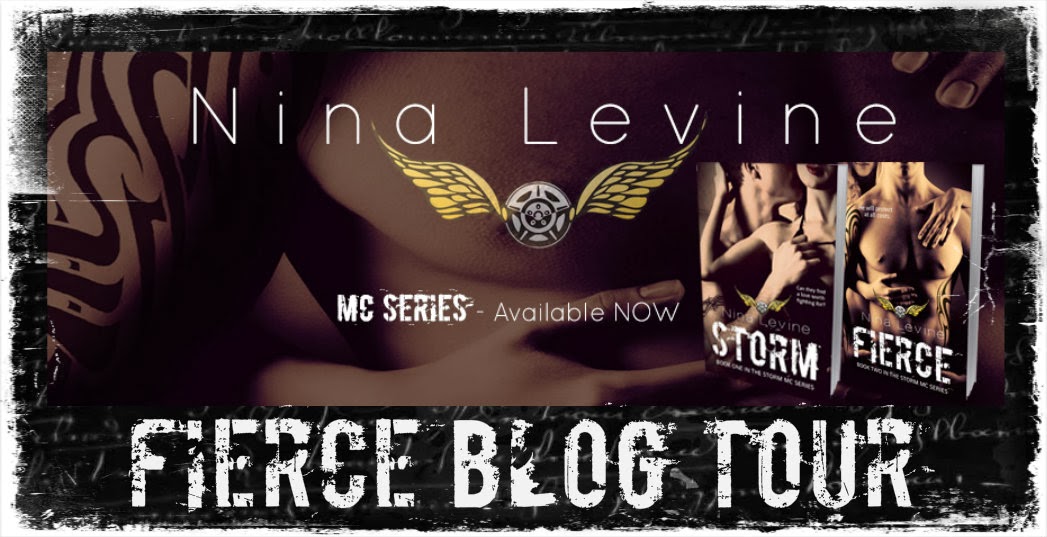 Fierce by Nina Levine
Book 2 in the Storm MC Series 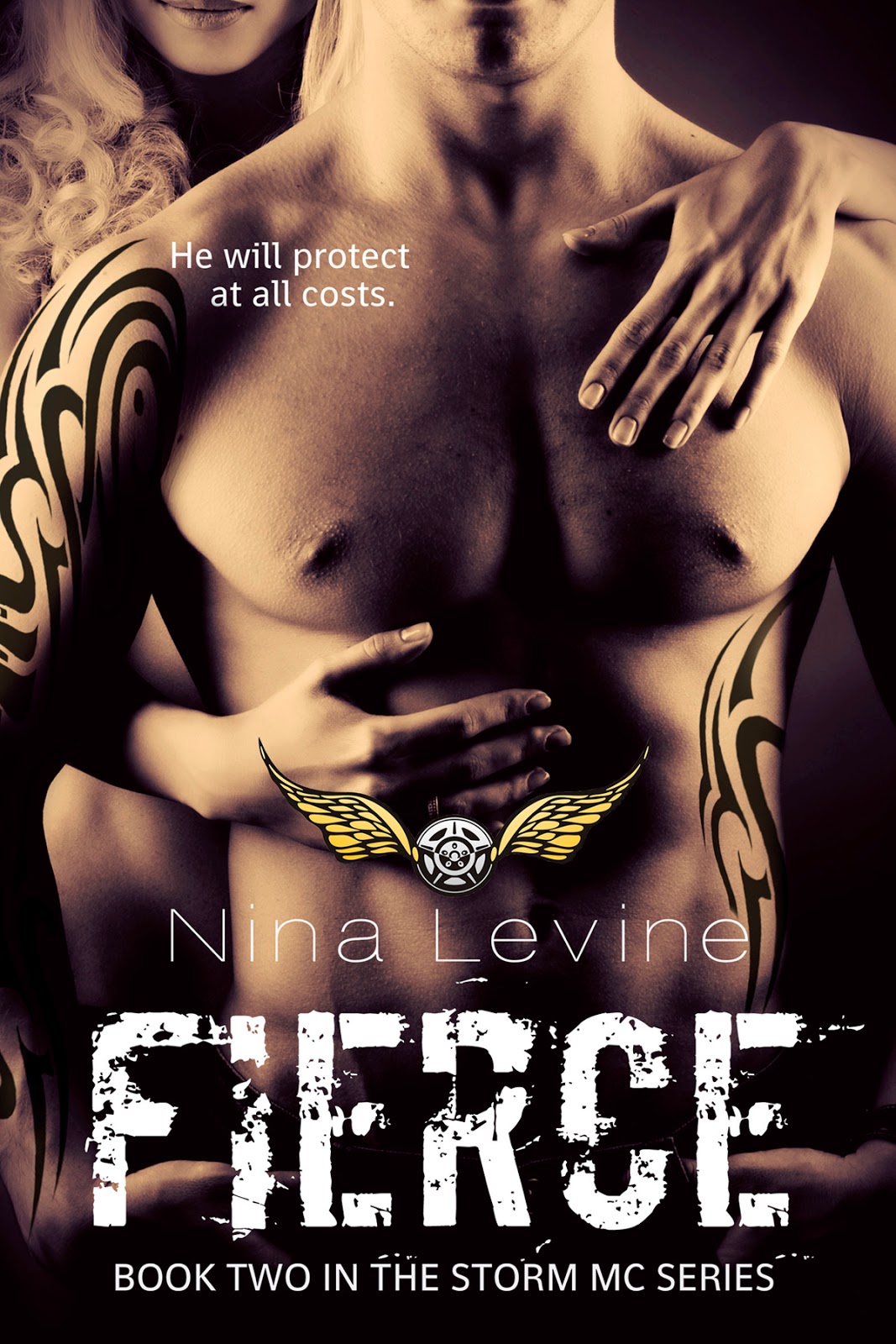 She’s everything he’s never wanted. He’s everything she’s never known.Scott Cole is a force to be reckoned with. As Vice President of the Storm Motorcycle Club he carries out his duties with a ruthless determination. He moves through life with a clear agenda – protect his club and his family at all costs.
He is intense.He is loyal.He is fierce.He doesn’t give his love easily, but when he does, he loves fiercely. Settling down, however, has never been part of his plan.Harlow James is a country girl who has never met a biker in her life. She is also done with men. In her experience all they ever do is lie, cheat or steal. When she meets Scott Cole she knows he is heartbreak on legs.He is confident.He is sexy.He is bossy.She knows she must fight her growing attraction to this complex man in order to guard her heart. When his world crashes into hers and danger comes calling, Scott’s fierce desire to protect kicks in and Harlow realises that she might just have found a man worth taking a risk on.

My eyes dropped to her chest.  That top fit her tits like a glove; any man
would struggle to keep their eyes off her chest.  I wasn’t a saint and had no problem showing
my appreciation so it took me more than a few moments to look back up to her
face.  She was shaking her head at me but
there was a hint of a smile.
I
smirked.  “Sweetheart, if you’re gonna
wear shit like that you’ve gotta expect men to stare.”
“Turn
around.”
“What?”
She
repeated herself.  “I said, turn around.”
“Yeah,
I got that but I’m wondering where you’re going with this.”
She
walked over to me until she was in my personal space.  A sexy smile came over her face and she said,
“I want you to turn around so that I can check out your ass cause baby, a
woman’s got needs and if you’re gonna wear shit like that, her needs are gonna
be fulfilled.”
I
reached out and curled my hand around her neck, pulling her closer.  “Fuck woman, what are you doing to me?”
Her
breathing became ragged.  “The same thing
you’re doing to me.” 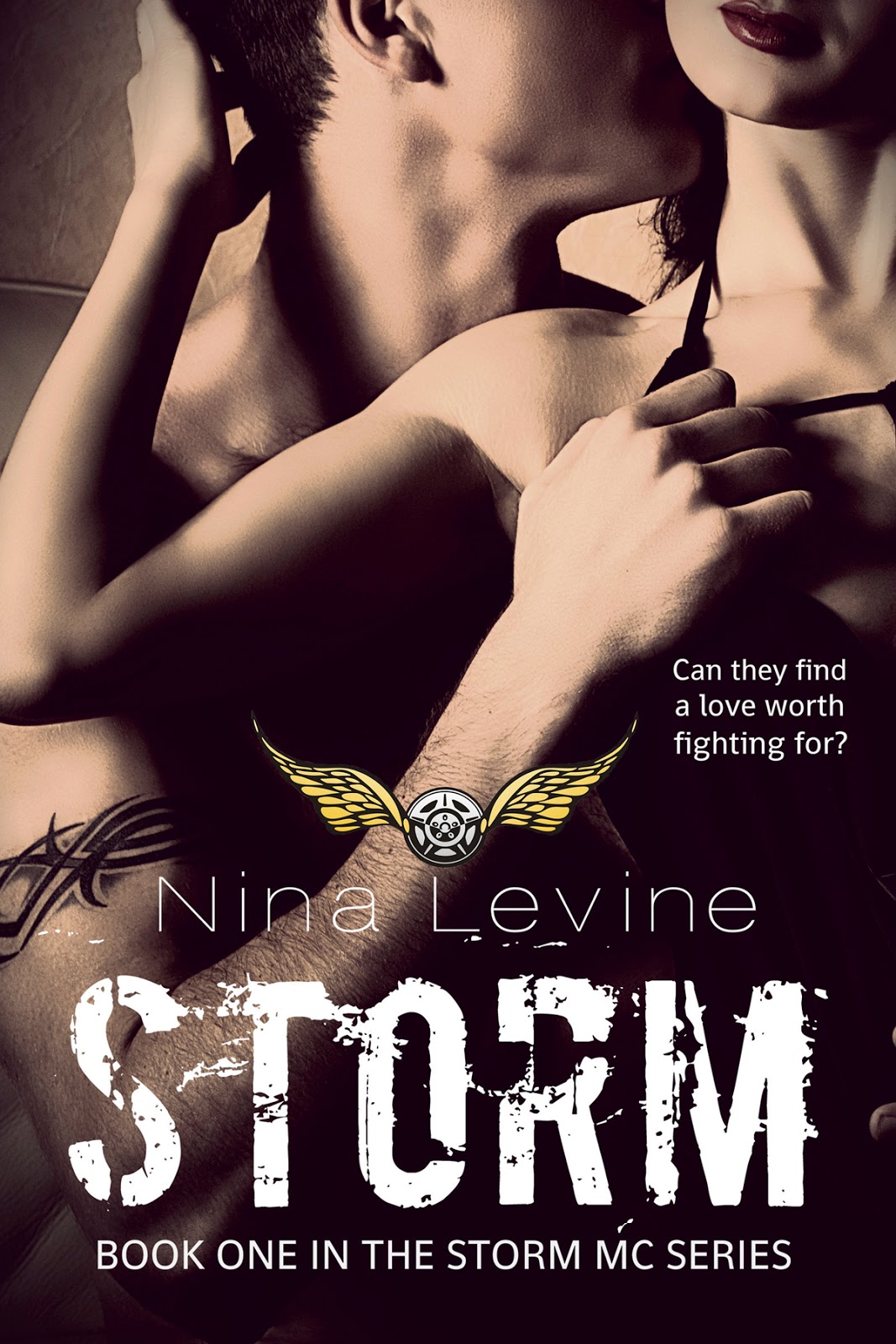 Life can be a bitch but love can get you through any storm.
Madison Cole’s family is the Storm Motorcycle Club. Her father is the President and her brother is the VP. She grew up surrounded by bikers, crime and violence. Two years ago she walked away from her family and the world they live in. Her soul was shattered, her heart was broken and she had an addiction she couldn’t shake. She picked up the pieces and put herself back together. Now her family wants her back. The club is being threatened and they send a club member to return her home to safety; the one person that could destroy everything she has worked so hard to build.
Jason Reilly has sacrificed a lot for the motorcycle club he calls family. Two years ago he made the biggest sacrifice of all; he gave up the woman he loved for them. Now he is being sent to bring her back and he is conflicted. He thought he was over her but discovers their connection is as strong as ever. Their love was all-consuming, passionate and fiery. It was also their undoing and he doesn’t know if either of them is strong enough to battle the demons that ripped them apart, to find love again.
Madison and Jason are brought back together by a force out of their control; one that pushes them to a breaking point. Can they overcome their past and discover a love worth fighting for or will the harsh reality of their world finally and completely break them both?

I found her sitting at the bar with Stoney. I liked Stoney, but I didn’t like the way he was looking at Madison. “Eyes off her tits, Stoney,” I snapped.
Madison’s eyes widened and I waited for her response but she surprised the fuck out of me with her silence.
“Yeah, yeah,” he grumbled, moving off his stool to stand, “I’m outta here.”
“His eyes weren’t on my tits, J,” she said as we watched him leave.
“Yeah, baby, they were.”
She rolled her eyes, “You weren’t even standing in front of him to be able to know that.”
I moved into her space, pushed my body up against her side and wrapped an arm around her shoulders. Leaning my face down, I spoke into her ear so that only she could hear me, “I know they were because you’re wearing a low cut, tight dress that your tits are almost spilling out of and it’s exactly where my eyes would have been if I was Stoney.” 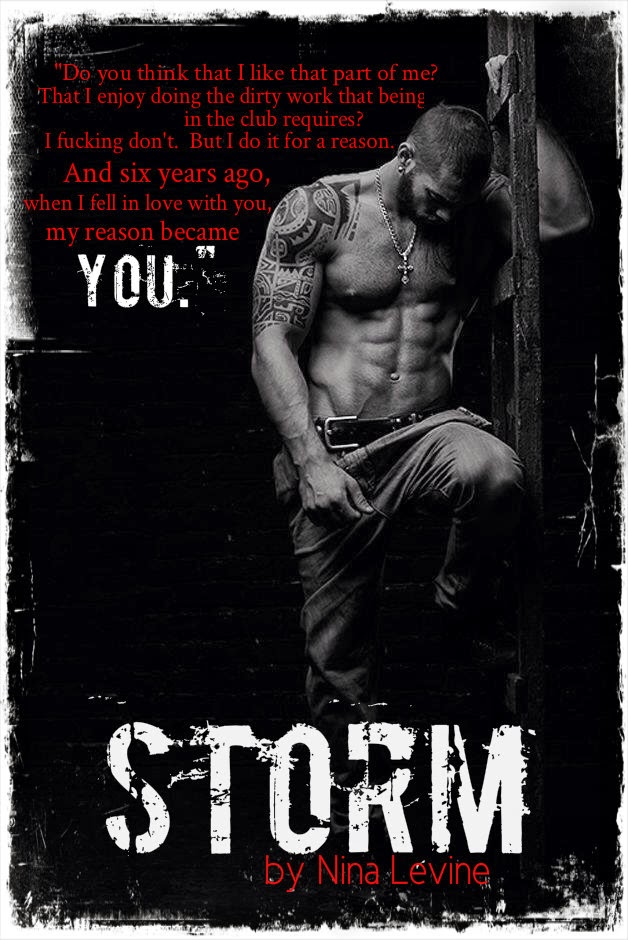 Nina Levine is an Aussie writer who writes stories about hot, alpha men and the tough, independent women they love. WARNING: You will find hot, dirty sex, lots of swearing, occasional violent encounters and men and women who live fast and love hard.Nina’s debut book Storm was released in November 2013. It is based around the Storm Motorcycle Club and is the first book in an MC series.  The second book, Fierce, is due out in early 2014.

Join Nina’s Newsletter for exclusive content & news on her books.