How much is too much to love? Travis Maddox learned two things from his mother before she died: Love hard. Fight harder.

Can you love someone too much?

In Walking Disaster, the life of Travis is full of fast women, underground gambling, and violence. But just when he thinks he is invincible, Abby Abernathy brings him to his knees.

Every story has two sides. In Beautiful Disaster, Abby had her say. Now it’s time to see the story through Travis’s eyes.

Falyn Fairchild can walk away from anything. Already leaving behind her car, her education, and even her parents, the daughter of the next governor of Colorado is back in her hometown, broke and waiting tables for the Bucksaw Café. After every shift, Falyn adds to her shoebox of cash, hoping to one day save enough to buy her a plane ticket to the only place she can find forgiveness: Eakins, Illinois.

The moment Taylor Maddox is seated in Falyn’s section at the Bucksaw, she knows he’s trouble. Taylor is charming, breaks promises, and gorgeous even when covered in filth—making him everything Falyn believes a hotshot firefighter to be. Falyn isn’t interested in becoming another statistic, and for a Maddox boy, a disinterested girl is the ultimate challenge.

Once Falyn learns where Taylor calls home, everything changes. In the end, Maddox persistence is met with Falyn’s talent for leaving, and for the first time, Taylor may be the one to get burned.

A BEAUTIFUL FUNERAL (The Maddox Brothers #5):

Losing has never been easy for a Maddox, but death always wins.

Eleven years to the day after eloping in Vegas with Abby, Special Agent Travis Maddox delivers his own brand of vigilante justice to mob boss Benny Carlisi. Vegas’s oldest and most violent crime family is now preparing for vengeance, and the entire Maddox family is a target.

The secret Thomas and Travis have kept for a decade will be revealed to the rest of the family, and for the first time the Maddoxes will be at odds. While none of them are strangers to loss, the family has grown, and the risk is higher than ever. With brothers against brothers and wives taking sides, each member will make a choice–let the fear tear them apart, or make them stronger. 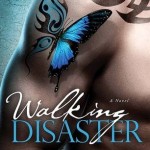 Imagine my pleasant surprise when I ended up with an ARC of Walking Disaster. I was even more surprised to be immediately drawn inside the sensitive, loving and intense head of Travis “Mad Dog” Maddox. Walking Disaster contains no surprise story lines; it is the story of Beautiful Disaster told from the POV of Travis. You do not need to have read Beautiful Disaster first, but I highly recommend that you do, in order to understand some of the nuances of the story and the characters.

Travis is loving, he is sexy, he is kind, he is sensitive and he is very, very caring. Yes, it’s true! Jamie McGuire has created a wonderful caring male character who will become the new book boyfriend to lots of fans.

Travis and his family lost their beloved mother at a young age. Her last words to Travis were, “One of these days you’re going to fall in love, son. Don’t settle for just anyone. Choose the girl that doesn’t come easy; the one you have to fight for, and then never stop fighting. Never stop fighting for what you want.”

These words serve Travis well when he meets his match in Abby “Pidge” Abernathy.

Travis knows immediately that Abby is very different from the endless parade of girls that he has been with. He is aware of his bad-boy reputation, but in his mind, he has always been nothing but totally honest with every girl he has ever been with:

“She was my opposite: innocent on the surface, and damaged deep within.”

I was a little frustrated at Abby’s stubbornness in constantly pushing Travis away, emotionally and physically, but smart and sexy-ass Travis takes his mother’s advice and fights hard for Abby!

I love a book with an alternate POV, so Walking Disaster fit the bill for me. I enjoyed reading the Las Vegas and fighting scenes from Travis’ POV. You will not believe what an intelligent, caring and loyal character Travis is.

Finally, the author also treats us to a wonderfully surprising and satisfying Epilogue that I can only hope will lead to much more Travis and Abby!

ARC provided by publisher in exchange for an honest review.