For the last two months, Brianna has discovered something she never thought she would again. Hope. After the horror of being Ian’s slave for ten months, a fate she never imagined she’d escape, it feels as if she is living a dream. She has freedom she hadn’t expected to have again, and she wakes up every morning not fearing what the day will bring.

There is also Stephan. The man who saved her from the daily torture she had to endure at the hands of Ian and his friends. The same man who makes her heart race with just the thought of him. Life is good.

Outside forces are determined to conspire against them, however. When Brianna’s father shows up on her doorstep, it sends her world spiraling out of control. He brings with him new information about how Brianna ended up in Ian’s clutches, but will it make a difference? Will Stephan be able to find a way to make Ian pay for all he made Brianna suffer?

As Brianna and Stephan try to find out the truth, their relationship is tested. She is forced to face her past head on and deal with the ugly reality of what happened to her. Will Stephan’s love be enough to see her through her newest challenge, or will the fragile trust they’ve built come crumbling down around them as the truth makes itself known. In Truth, Brianna is slowly healing from her earlier brutal confinement, but is far from free of the emotional scars inflicted on her by Ian, her cruel Master. Although Stephan has become her ultimate protector, he is after all still a Dom and he must be extremely cautious in furthering their Dom/ sub relationship. Brianna also worries what their friends and acquaintances will think about their very unusual relationship, but Stephan does everything, and I mean everything, in his power to help her learn to trust again.

Stephan is one swoon-worthy Dom! He takes great pride in helping Brianna and loves that even the simplest things in life bring her extreme happiness. The story also has some danger and lots of thrilling elements with the presence of Brianna’s father as well as Stephan’s efforts to bring Brianna’s former sadistic master, Ian, to justice.

Yes, there is a very sudden and shocking conclusion to Truth. The story is so rich and well-crafted that I can’t wait to see where Ms. Hayes takes Stephan and Brianna next. Truth is a must-read book and I can’t wait to read more from Sherri Hayes.

ARC provided by The Writer’s Coffee Shop Publishing House (TWCS) in exchange for an honest review. Sherri is the author of several novels, and a short story, A Christmas Proposal. She lives in central Ohio with her husband and three cats. Her mother fostered her love for books at a young age by reading to her as a child. Stories have been floating around in her head for as long as she can remember; however, she didn’t start writing them down until she was thirty. It has become a creative outlet that allows her to explore a wide range of emotions while having fun taking her characters through all the twists and turns she can create. When she’s not writing, she can usually be found helping her husband in his woodworking shop.

Giveaway: 1 reader will receive an ebook of Truth (open internationally) 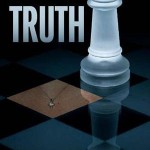 Claire Nichols endured the CONSEQUENCES of Anthony Rawlings’ vendetta.
When she first arrived to his home, her goal was survival. Through strength and compartmentalization Claire captivated her captor. Her resilience in the face of his rule threatened Anthony’s well developed plan. Domination became desire and power turned to love.
Their passion and adoration in a world of opulence appeared perfect. Yet, reality was a roller coaster of emotion. Claire’s world teetered on the edge of sanity as Antony monitored her every move. When given the opportunity to flee, Claire drove away. A fateful decision which set a well laid plan into motion.

Conspiracy and unfulfilled promises result in an early prison release for Claire. Will it be that easy? Faced with freedom from her past… can Claire seize it? Can she build a new life, mend her broken spirit, become the woman she once was, and seek her own revenge? Or is it all a game? And does the game master have different plans?

Ms. Romig has done it again. This can’t really be categorized as a “romance” although sorry, again I think I might be the only reader who loved Tony. Ms. Romig again treats the reader to a satisfying story and memorable characters. She also establishes a very strong sense of place and each location will stay with you long after you finish this book. Kinda can’t wait for Book #3 in this series, CONVICTED. I don’t want Claire and Tony’s story to end!

Oh and if I neglected to mention it, Tony is HOT. Ms. Romig has been quoted as saying that she originally envisioned Jon Hamm and Natalie Portman as Tony and Claire. My vote goes to either Joe Manganiello or David Gandy (of course). Read. This. Book. Be warned: you will stay awake until 3 AM many nights in a row, you will ignore your chores and your family, and your work might suffer. You will not see these twists and turns coming.