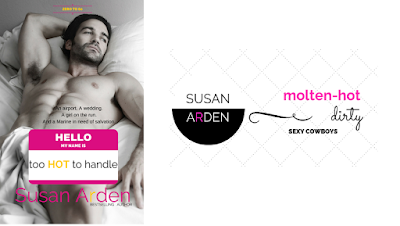 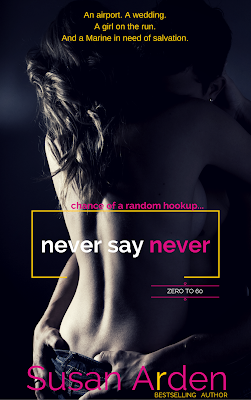 SEX UP AGAINST A WALL AND SOME.

If you can’t
stand the heat, better not come near this nuclear fusion Western, ’cause
baby you will get burnt!
A random hookup…

TOO HOT TO HANDLE

Buy links:
Never Say Never http://www.amazon.com/dp/B019S6ZH5O
Too Hot To Handle http://www.amazon.com/dp/B019TKC9CI
And here’s a hot-n-tasty teaser:
Pulling away
from my mouth, she gazed at me, her pupils fully dilated. “I’m ready to come.
Are you?”
“Margo,” I grunted,
taking hold of her hands. I wanted to kiss every inch of her skin. “I’m going
to take my time with you. Suck on your clit until you soak my mouth.”
“Let’s go somewhere.
Anywhere.” She piloted my hands down between her thighs. “Fuck me. So hard you
bruise me. Fuck me everywhere,” she begged. “So rough it hurts. Really. Hurts.
Can you?”
“Yeah.” I captured
her wrists.
We stared at each
other. She asked me to hurt her. Something I’d never delivered to another
woman, but with her everything was different. Margo unlocked a side of me that
demanded I mark her. Even if it meant she’d experience pain mixed with
pleasure. I got what she was after—I hungered to give her that and more, but
not in my truck. We’d need hours…days. And a plan.
“Please,” she
whimpered, her breath sweet against my mouth.
“Not here. The next
time we fuck, I want you in my bed. Open and submitting to me. Baby, I’ll give
you what you need. So much, you’re going to surrender completely to me. Or not
at all.”
IF YOU LIKE YOUR ROMANCE SO HOT
IT SMOLDERS,
then you’ve come to the right ranch.
This girl wants it hard.
This man isn’t going to let her get away. 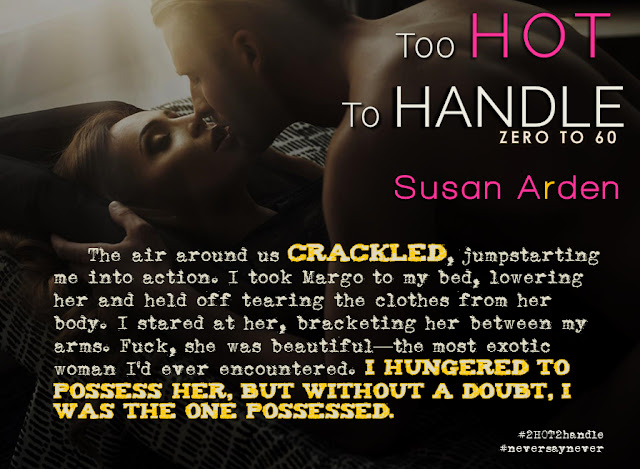 AND TOGETHER THEY’RE TNT.

Then on Jan. 12, TOO HOT TO HANDLE crash-lands! 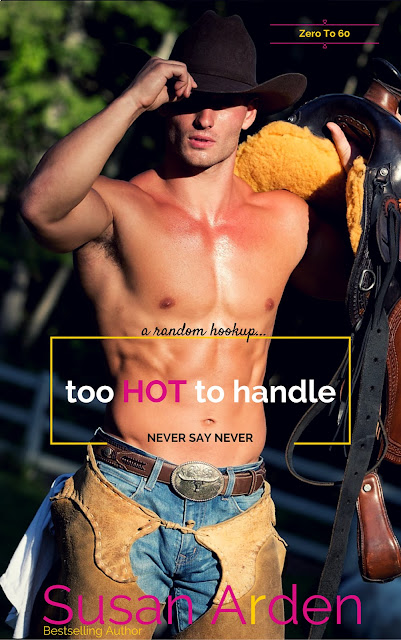 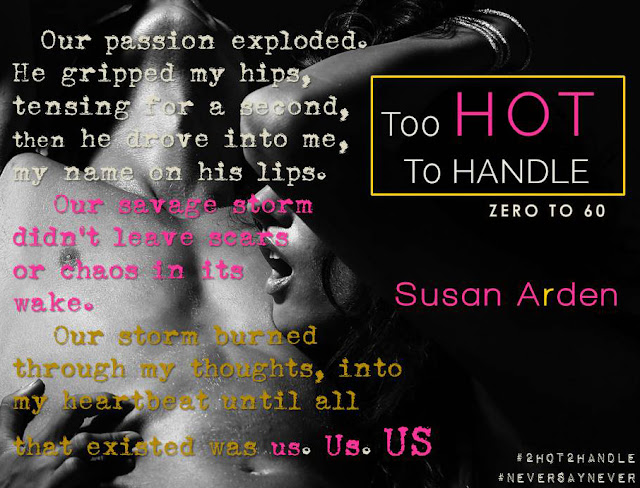 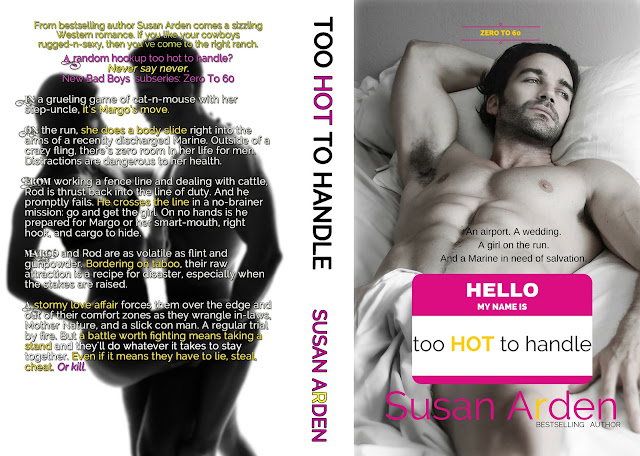 Too Hot To
Handle buy link: AMAZON
Remember all
author earnings from the sales for January 2016 go to benefit the amazing
Semper Fi Fund.

Are you TOO HOT
TO HANDLE?  Hope so!

~snicker~
Author Bio: Susan Arden
After packing up and moving to Nashville, Susan married the man
standing behind her at Starbucks. Her husband is an incredible guy who puts up
with a fly-by-the-seat zany wife. Together, they support several charity
organizations including RAINN.org, Semper Fi Fund, Diversity In Books, and a robotics
program for children.
Susan loves comedy in all forms. And music—anything dance-able. You’ll
find her singing and dancing if she’s in the kitchen and cooking. And speaking
of things that sizzle, if romance starring a dirty-talkin’ sexy cowboy ignites
your fire, then stay in touch via Susan’s RED-HOT ROMANCE newsletter. Sign up for freebies, releases, and bad boy
news!
Social Media Links:
CATCH SUSAN HERE
FB | Blog |Twitter |Amazon |Tumblr
Pinterest | Instagram | Google+

One day is all it takes to be tempted into playing the edge.

After escaping an abusive past, Eliza refuses to accept the mind-numbing existence she’s cast into. Living in the shadow of her overprotective sister, leaves Eliza suffocated and stifled, until Graham Gordon takes up residence in her yoga class and in her head. Just like that, her vanilla world is turned upside down. Graham is everything she should avoid and everything she’s ever desired.

Graham Gordon is wealthy, privileged, and harbors a secret vice no one would ever suspect. In Eliza, he has found the perfect acquisition: an innocent teacher he can’t seem to forget. During a private yoga session, Graham makes Eliza an offer she can’t refuse and teaches her what it means to submit to his every desire.

Within Graham’s powerful presence, the veils under which Eliza hides are stripped away, unlocking her inner hunger to be dominated. But will Graham’s possessive nature save her from the demons of her past, or be another experience she must survive?

Silently, he extended his hand filled with my things. I had no choice but to sweep my fingers over his palm never expecting a zapping current to pass between us. I shivered, jerking my arm backward as the electrical jolt raced up my arm before discharging. I gasped when it landed deep in my belly. Distracted by my reaction, I made the mistake of meeting his gaze. His dark eyes in the daylight were bottomless, and his attention had my pulse in a race, but where the heck was the finish line?

“Thank you,” I mumbled. “I can manage.” I wished he’d stopped helping me since I was coming undone.

“No question. Still I want to make certain you’re all right.” Once more our gazes locked, and the effect was like entering into a timeless chasm. So, there I was kneeling on the ground, unprepared for the cauterizing heat of staring into his eyes at close range. It was all too much. I ground my teeth with the need to get away before I did something incredibly stupid.

“Not a second ago.” He snorted a laugh. “Luckily, this machine basically drives itself and brakes fast and hard. Really, you could’ve been hurt if it’d been another car and driver.” The way he said fast and hard had me sputtering as the words echoed within my mind, sending a swarm of butterflies housed in my stomach into flight. Yep, I remembered, he did that to me. He offered the last few items he’d picked up and I reached for them, brushing my fingers over his.

“Well, bully for me.” The words slipped out of my mouth. No way to pull them back, so I finished with, “This isn’t NASCAR, you know.”

Without a break, his brow lifted. Game on. “Nor the Boston Marathon, sweetheart.”

“Humble much?” I asked, going with the flow.

“I’m not here to debate. Eliza, isn’t it? I dropped by to see when you might have a moment to talk.”

“Yes. Talk.” He inhaled in that way people did when they chose their words carefully. I’d seen it, but rarely practiced the art. “Last night in the class and now, I’m convinced we have a connection between us. No sense in running from it.”

His eyes bored into mine and I froze. It got worse when he tunneled his fingers through hair, and a blast of heat rippled through me. The way his hair stood up looked like he’d fucked someone senseless.

Who was I fooling? I seriously wanted to book passage on that cruise. “Oh,” I replied deep into a brain drain.

“Unless, you tell me to go,” he spoke to me in a measured tone.

The seduction is only the beginning.

But Eliza’s a world away from the beaches of Miami, ready to learn the secrets behind the man who holds her a willing captive. The man whose insatiable appetite might just break her. It’s a point of no return if she agrees to play the edge.

“Miss Hillwood, care to explain what the hell you’re doing here?” The sound of Graham’s seductively deep voice swept over me from behind and exploded in my head.

I turned so fast I got whiplash. Our gazes connected, and the grimace he wore melted me, sending a jolt of something like apprehension or anticipation deep in my belly. I gaped up at him with my damp hair partially obstructing my view as he stood over me, appearing powerful and all too much a predator. And like prey, I sat there hypnotized by his closeness and captivated by the thought of what he’d do next.

He brushed back some of my bangs. “From your flushed cheeks, I can see you’ve been here awhile.” He glanced around the club as he lightly traced my bottom lip. The feel of fingers on my skin made me hungry for more. “I take it your friends are still out on the dance floor.”

“How do you know who I came with?” I asked, unwilling to get up and throw myself at him.

Dressed in dark jeans and a black button-down shirt that stretched over his muscular chest and broad shoulders, he was sin, sex, and a click away from losing it. And I drank in the sight of him. Graham’s clothing left nothing to the imagination for someone who’d been pinned under him. That person being me.

“I thought I made myself clear when I expressly told you to go home and call me.” He ran his knuckles along my jaw. “Didn’t I?” The slight kicked-up curl to his smile gave me the distinct impression the soreness between my legs would be nothing compared to what he had in store.

I wet my lips, his focus trained on my tongue, and I swallowed. Seeing the heat in his eyes build, I struggled to breathe. The pounding music on the dance floor echoed in my heartbeat, thudding way too loud in my chest. I knew he wasn’t here to share a drink. He fully intended on delivering something we both remembered. His eyes glinted brighter, and he gave me a look that promised he’d consume me without mercy.

“I forgot. Things got a little weird,” I offered, plastering innocence over my face.

“Eliza,” he growled my name in a low rasp filled with hunger and frustration.

I twisted my fingers in my lap. “Look, this is my last night out with friends. Besides, I don’t see you sitting at home knitting a scarf. Why should I when that’s what I’ll be doing for the next six months, if you have your over-the-top way?” That had to be the alcohol talking—this played into what we both wanted, and I never made things this easy. For anyone.

“Do you remember the last time we had to take a short walk?” His arched brow sent a dart of excitement racing up my spine.

“Oh, me and a few places in my body remember more than well.”

He leaned in and whispered up against my cheek, “That tone, Ms. Hillwood.”

I’m not into chocolate…I prefer brightly colored candy. Wild flowers over roses. Definitely, I prefer the company of children and animals over politicians and bureaucrats. Was a teacher, now turned into a romance writer, and just got into cover and interior book design which is a whole other fascinating world.