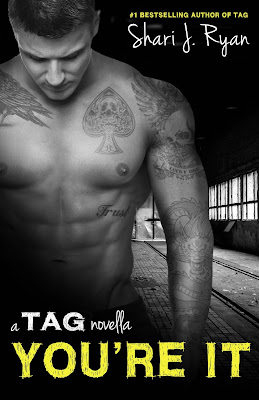 Our little family has been together for four years, and life has been good, considering my track record. But In the blink of an eye, my ease was suddenly gone when I heard his terrifying words. I knew from the look on Tango’s face and the way he avoided my gaze—all hell was about to break loose. Now it seems like the dangers I spent years desperately avoiding are starting to threaten my happily ever after.

Screw with me, that’s one thing. Screw with my family, and we’ve got a problem… 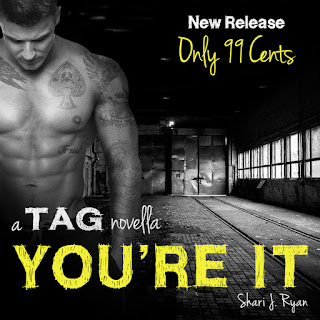 When Shari isn’t writing, she can usually be found cleaning toys up off the floor.

To learn more, visit her at, www.sharijryan.com. ’Tis the Season for an inappropriate Christmas tale, chock full of kinky fuckery, food fights, and lots of hook ups!

Seven and Levi are celebrating their first holiday together.
Star is pretending to be domesticated.
And the siblings are banging each other left and right.

Seriously, what more do you expect from the Seven James-Parker/Star Bloom crew?

One thing is for sure, this is a Christmas no one will be forgetting anytime soon!

Dawn can normally be found swearing like a sailor, making late night drive-thru appearances, arguing with her kids (or being run over by their power wheels), reading a steamy romance while hiding in her bathroom, writing her little heart out on her laptop (or dragging her Macbook to the Genius bar praying they can save her latest work in progress), or sipping on a smoothie. She loves to hear from her fans, readers, and authors alike. Feel free to drop her a message.

Dawn rarely takes life seriously, so be sure to expect heavy sarcasm from her. She is also the life of the party, so be sure to meet up with her at one of the many author events she will be attending in the next couple months. Buy her a shot of whiskey, and she will love you for life. We are so excited to be participating in the I’LL BE HOME FOR CHRISTMAS Launch Day Blitz! Scroll down for an excerpt and Rafflecopter giveaway! There’s nothing in the world Army Sergeant Vic Carponti loves more than his wife and his country. Smart-mouthed and easy tempered, he takes everything as a joke . . . except his promise to come home to his wife, Nicole, for Christmas. As he prepares to leave for his latest deployment into Iraq, Vic will do everything he can to shield his beautiful, supportive wife from the realities of war . . . and from his own darkest fears.

As a career army wife, Nicole Carponti knows just what to expect from her husband’s tour of duty: loneliness, relentless worry, and a seemingly endless countdown until the moment Vic walks through the door again. But when the unthinkable happens, Nicole and Vic’s bond is tested like never before and changes everything they believe to be true about the power of love and the simple beauty of being home for the holidays. USA Today bestselling author Jessica Scott is a career army officer; mother of two daughters, three cats and three dogs; wife to a career NCO and wrangler of all things stuffed and fluffy. She is a terrible cook and even worse housekeeper, but she’s a pretty good shot with her assigned weapon and someone liked some of the stuff she wrote. Somehow, her children are pretty well-adjusted and her husband still loves her, despite burned water and a messy house.

She’s written for the New York Times At War Blog, PBS Point of View: Regarding War Blog, and Iraq and Afghanistan Veterans of America. She deployed to Iraq in 2009 as part of Operation Iraqi Freedom/New Dawn and has served as a company commander at Fort Hood, Texas.

She’s pursuing a PhD in Sociology in her spare time and most recently, she’s been featured as one of Esquire Magazine’s Americans of the Year for 2012.

“You’re not serious.”
Carponti turned around, his shoulders covered in flecks of red hair. “What?”
Nicole grinned as she leaned against the door. “Garrison is going to kill you.”
“Garrison is going to love my new hair cut. It looks just like his.”
Nicole arched one blond eyebrow. “Except for the bright red fuzzy patch in the center of your head.”
Carponti shrugged and rubbed his hands over his freshly shorn scalp. “I can’t wait to see what the sergeant major says.”
“Isn’t he going to be mad?”
Carponti brushed the hair off his neck. “We’re going to war. My hair isn’t on the list of things he’s going to worry about.”
Nicole looked down at the pile of hair on the floor and sighed. “Then why do it?”
Carponti smirked. “Because it’ll get a rise out of him and I live to make his blood pressure go up.”
She laughed. “You need a hobby. Other than blowing things up.”
He sidled across the room and hooked his thumb into the waist of her jeans and tugged her close until their hips met. “I have a hobby. Keeping you well satisfied.”
She sniffed but her lips curled at the edges. “You’re going to be derelict in your duties for a while.”
“But I’ll be home soon enough and then I’ll make up for it.”
“I think I’m going to need a deployment boyfriend.”
He grinned wickedly. “Did you already get one?” He backed her up against the wall, his body hard against hers. God but she loved this man. “Can I see it?”
A slow flush crept over her face and she tried to look away. He threaded his fingers with hers and lifted her arms over her head. Her back arched with the movement.
“Please?” he whispered against her lips. “That would be an awesome memory to take with me downrange. Just think of me, alone in the middle of the desert. One visual of you with your deployment boyfriend and it could make a lonely night go by so much faster.”
Nicole giggled until the laugh overwhelmed her and she was gasping for air. He released her hands and she threaded them around his neck. She buried her face against his throat and laughed.
“There’s something really wrong with you,” she said when she could breathe again. “I’ll send you a video.”
He brightened instantly. “Really?”
“Yes. And dirty letters.”
“Promise?” He nibbled along the edge of her jaw, guiding her slowly backward toward their bed, stacked high with his two duffle bags and all the crap he still hadn’t packed.
But he didn’t care.
“I promise. And you’re going to be late.” Her voice caught in her throat.
“Screw it,” he whispered. “This is the last chance to make love to my beautiful wife before I have to go traipsing across the desert like Lawrence of Arabia.” He nibbled at her earlobe while his hand slipped down her belly to the moist head between her thighs. “Tell you what. You send me a picture of yours and I’ll send you a picture of mine. Maybe I can get him a little horse and saddle and send you a picture. Maybe a Barbie camel. I can put him in a little man dress.”
She laughed and Carponti’s heart swelled in his chest at the sound of it.
“I’m going to hold you to that.” She traced her fingers over his scalp, her body soft and warm against his erection. “I want a picture of him in a man dress in exchange for a video of the deployment boyfriend.”
Her legs bumped into the back of the bed and he followed her down. Tangled between the duffle bags and his uniforms, he made love to her one last time before he got on a plane and headed to war.