Release Day is Tuesday March 1st, but you can add it to your goodreads shelf now. 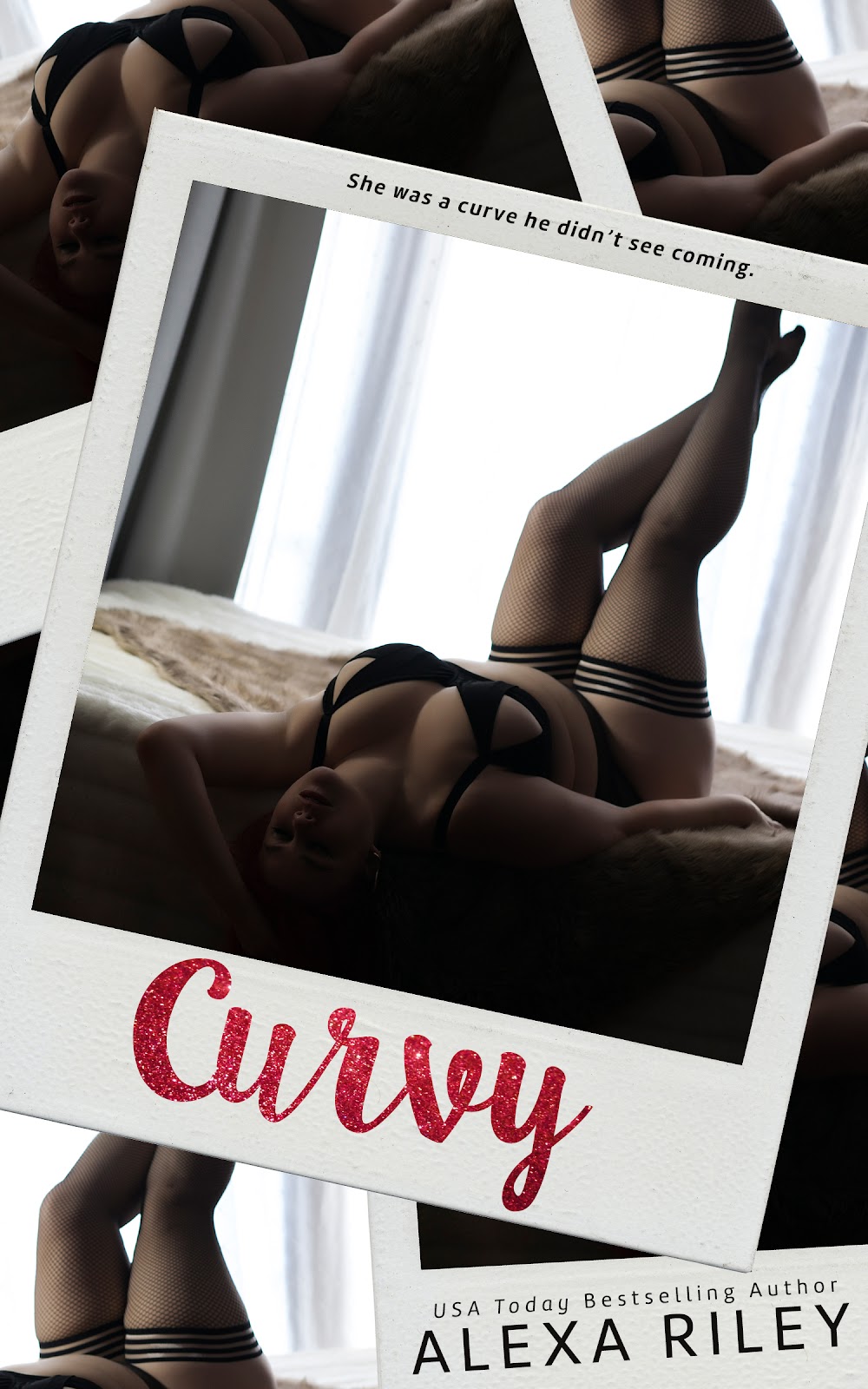 The first time Flynn Long sees her, she’s lying on a bed in lingerie. The picture is soft, just like her curves, and instantly he’s obsessed.

Cali Carr is at the end of her full-figure modeling career when she’s hired for a new campaign. But when the owner of the company steps out of the shadows and starts calling the shots, a job is the last thing it feels like.

Warning: Over the top isn’t strong enough for what this short story is. It’s velvety sweetness coated in insta-love cheese, and it’s waiting for you to take a bite.

“You told me you had this under control. That was the only reason I agreed to invest in a women’s lingerie line.”

I look down at the sales charts of Curved Intimates, a company we invested in over six months ago. It’s bleeding money, and I’m close to just scrapping the whole project and be done with the headache. I have enough on my plate as it is.

When you invest in as many things as Breakstone Corp does, you can’t be surprised when not all of them work out. But I had agreed with Mark when he brought this proposal to me. It was supposed to be the next Victoria’s Secret. The pitch was good and the women’s market wasn’t one we had worked our way into yet. Mark said it was something he really wanted to take on, so we went for it.

I know shit about fashion. I pay someone to shop for me and pick out my clothes. I know even less about women’s undergarments. Fuck, I can’t even remember the last time I saw a real woman in her underwear.

I run my hands over my face, trying to relieve some of the tension headache that’s starting to build. It’s already six o’clock and it looks like I’m going to be here another four hours at least.

“Lynn from marketing is waiting outside. She seems to think she’s come up with something.” Mark shifts uncomfortably, probably scared I’m going to fire him. But this is the first time he’s ever missed the mark like this before. He’s eager and good at his job, but if I had a wife and three kids, I’d probably worry if I fucked up, too. You can’t win them all, and I can’t fault him for wanting to try to branch us out to something new. It showed enthusiasm, and it’s the very reason I’d hired him

I flip through the last marketing ads in the folder again. They look standard, but there’s nothing special about the pictures, nothing that draws attention. They look like every other ad for women’s underwear you’ve ever seen. There’s no clear branding and nothing that stands out about this line.

“I hope it’s better than this shit.” I toss the folder back across the desk at him.

“I’ve been working with marketing. They have a few ideas I really like and—”

I cut him off. I want to get this show on the road. “Mark, calm down. I’m not going to fire you over this. We’ll hear marketing’s ideas, and we either do them or we drop the whole fucking thing.”

Mark nods before heading over towards the door, letting Lynn into my office. She shuffles over to my desk clutching a pile of binders so high I can’t even see her face. The stack almost looks bigger than her. I’m not sure how she’s made it all the way up here with them.

“Sir, can I get you or anyone else a drink?” Sally, my assistant, asks as she stands in the doorway to my office. I know the only reason she’s offering is because other people are in here. She stopped getting me my coffee years ago, telling me she didn’t have a degree in business so she could waste it on fetching coffee. She’s an expensive pain in the ass I couldn’t live without. Luckily for me, her kids are off in college and her husband doesn’t seem to mind the long hours I often need her to work. I have a feeling she’s made me dependent on her on purpose. There’s no way I could fire her or her smart mouth.

“I’m good, Sally.” I look to Lynn and Mark, who both say, “No, thanks,” before Lynn goes back to trying to get her binders in the order she likes. One falls off the top, landing open, making my whole body go still at the image.

The woman in the photo is lying on a bed, her legs in the air and crossed at the ankles. She has on fishnet stockings that lead up her legs to her thick thighs. She’s wearing high-waisted black underwear that shows off her wide hips, giving her an old-school pinup feel, and a sexy bra that barely contains her full breasts, the material just covering the essentials. Every part of her is thick and luscious. All the blood in my body flows to my dick. I’ve never had a reaction like this to a woman. I’m too old to get a fucking hard-on from seeing a woman in a picture. She’s not even naked. Just the sight of her in her underwear has me nearly bursting in my slacks.

I see Mark out of the corner of my eye as he takes a step towards my desk to see what’s caught my attention. I slam the binder closed, not wanting him to see her. Possessiveness flows through me, and I look at Lynn, who’s still going through the binders. When I look at Mark, he has his eyebrows raised in question.

I pick the binder up and open it to show Lynn. When Mark takes another step to see what I’m showing her, I can’t hold back.

“Don’t,” I bite out, making him pause, the confusion on his face growing. “Who is this?” I demand, needing more information on her. Anything.

“Oh. Just an idea I was thinking about. Going a little old school with some of the looks and appealing to all body types.”

“Her name?” I push, and she reaches for the binder. I pull it back, not wanting it taken from me. Almost like a toddler with his favorite toy.

“If you flip a few pages, it should be in the front. Before her pictures start,” she says, seeing that I’m not going to give her back the binder.

I turn the book around to me and hurriedly flip through the pages until I get to the front.

I turn the page, hoping there’s another picture of her. The one on the bed made it hard to see her face. I flip to the next page, and I literally have to sit down in my chair. She’s smirking in the picture. Her full lips are just as lush as the rest of her. Her skin is flawless, a creamy white making the little freckles that sprinkle her upturned button nose even more noticeable.

But what really got me are her stunning eyes. They’re a deep green like nothing I’ve never seen before. In contrast with her red hair, they are unmissable.

“Sir,” I hear Lynn say, and I look up at her. I have no idea how long I’ve been staring at the picture.

She tries to hand me another binder, but I have no desire to look at pictures of other women. What would be the point? They’d all pale in comparison. I’ve just seen perfection and I know nothing could beat it.

“No. I’ll leave it to you and Mark to handpick the rest of the girls for the shoot.” I stand up from my chair.

“The shoot will be next week,” I tell them. I want to see her as soon as possible.

“It will be next weekend. If the model’s photographer or something can’t make it, book someone else. But she,” I hold up the binder with her picture in it, “better be there. I don’t care what it costs.”

Standing up, I hold the binder in front of my crotch to hide my erection. I click the intercom.

“Sally, can you call my driver? I’m going down,” I inform her.

“Leaving already?” I can hear the shock in her voice.

“Yes.” I release the button. “Feel free to use my office until you’re done. I’ll see you tomorrow, Mark.” I head for the door with the binder still in front of me, hiding my very prominent arousal. I stop before I exit. “Send me any and all information you have on her, Lynn.”

“You’ll have it this evening,” she says, looking at me with big eyes.

Alexa Riley is two sassy friends who got together and wrote some dirty books. They are both married moms of two who love football, donuts, and obsessed book heroes.

They specialize in insta-love, over-the-top, sweet, and cheesy love stories that don’t take all year to read. If you want something SAFE, short, and always with a happily ever after, then Alexa Riley is for you!