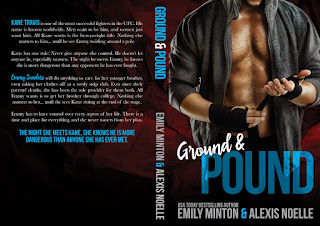 Ground & Pound
By
Emily Minton
&
Alexis Noelle
Releasing February 7th!!!!
Kane Travis is one of the most successful fighters in the UFC.   His name is known worldwide. Men want to be him, and women just want him.   All Kane wants is the heavy weight title, nothing else matters to him. Not until, he see Emmy twirling around a pole
Kane has one rule, never give anyone else control.  He doesn’t let anyone in, especially woman.  The night he meets Emmy, he knows she is more dangerous than any opponent he has ever fought.
Emmy Sanders will do anything to care for her younger brother, even taking her clothes off at a seedy strip club.  Ever since their parent’s death, she has been the sole provider for them both.  All Emmy wants is to get her brother through college, nothing else matters to her, until she sees Kane sitting at the end of the stage.
Emmy has to have control over every aspect of my life. There is a time and place for everything, she never wavers from her plan. The night she meets Kane, she knows he is more dangerous than anyone she has ever met.
Add it to your TBR today!
http://bit.ly/1ONX8BS 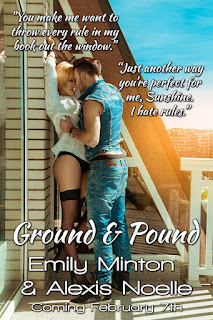 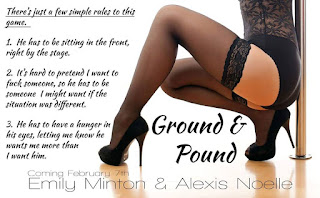 Alexis Noelle
Author Bio
Alexis Noelle lives in Philadelphia, Pennsylvania with her husband, and three kids. She loves spending time with her kids, although she has to hide the computer from them when she is writing! She love being active and being outdoors, especially if it involves any kind of shopping.
She has always been passionate about writing. She loves to read romance books and feels like being able to lose yourself in a book is one of the more exciting aspects. The books she loves to read and write will be ones that make you feel for the characters. Ashley believes that you should have an opinion on every character in a book whether you love them, hate them, or think they are up to something.
She also believes that the most important critic is your reader, so she loves to hear from the readers. She want her fans to be open & talk to her about what they want for the characters in the story, and what they would like to see happen.
Social Media Links
Facebook – http://on.fb.me/1zdctEN
Twitter – @_alexisnoelle_
Instagram – _alexisnoelle_
Snapchat – alexisnoelle01
Newsletter – http://eepurl.com/Vgqer
Email – alexisnoelleauthor@gmail.com
Website – http://alexisnoelleauthor.blogspot.com
Goodreads – http://bit.ly/1vW0nib
Amazon Author Page – http://amzn.to/1D7JIHb
Event Pre-order Form – http://bit.ly/15B6oEG
Paperback Order Form – http://bit.ly/1GVHkcD 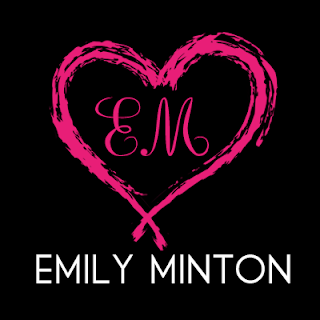