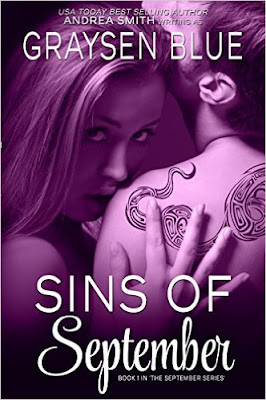 getBook.at/SinsOfSeptember
Sins of September, Book 1 in the September Series

I’m no angel. I never was. But when Mama left us just short of my fourteenth birthday, any chance of me becoming angelic flew out the window. My step-father, Jesse, had been the only ‘father-figure’ in my life from the time I was six years-old, but all that came to an end when Mama left. I was sent to live with my grandparents in another state; my half-sister, Scout, remained with Jesse, her daddy. And my world had crashed around me. Fast-forward four years. I’m almost eighteen and a somewhat normal teenage girl who’s curious about her sexuality, and determined to find someone like my Mama had – but hadn’t appreciated. As luck would have it, my stepfather wants me to spend the summer going into my senior year in Arkansas with them. He needs me to take care of my little sister, Scout over the summer. Four years have changed both Jesse and me in ways we hadn’t considered. It isn’t long before I encounter the obstacles involved in getting what it is I really want: Jesse Ryan. Complications follow, and I learn more than I ever anticipated that summer, not only about myself and my sexuality, but also about being true to myself, and putting others that I love first. ADULT CONTENT. SEXUALLY EXPLICIT 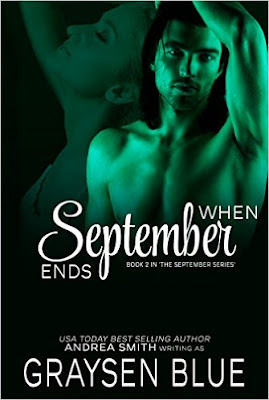 This book is the sequel to “Sins of September.”

My name is Jesse Ryan. I’m thirty, single (not officially divorced) but that’s a long story. Up until the summer of 2010, I was doing just fine raising my only child, Scout. I’m a construction worker in Fort Smith, AK. But that summer I needed some help with Scout. So that’s when I sent for my 17-year-old stepdaughter—and Scout’s half-sister, September. She has been living with her grandparents in Mississippi ever since her mother—and my estranged wife, Libby, had taken off on all of us years prior.

September turned out to be a very resourceful young woman, effectively ambushing my first budding romance since her mother had left us. But she didn’t stop there. Shortly after her 18th birthday, I found myself inexplicably drawn to her. Yeah, I get that there’s a twelve year age difference, but despite my better judgement and solid resolve, the heart wants what the heart wants.

Up until now, we have kept our relationship discreet, planning our future together. I’m preparing to start my own business, and September is preparing to start her freshman year of college. Then we get . . . the news.  And everything we’ve been planning is suddenly and inexplicably torn from us.

After more than five years without a word, my estranged wife, Libby, resurfaces. She had been seriously injured and now suffers from total amnesia. She doesn’t remember any of us.

Now decisions need to be made, and everyone looks to me to be the one to make them. But how can I make a decision that will be in everyone’s best interest?
Mature Content. 18+

My mind drifts back to the day Jesse said good-bye to me.
The day he came here to pick up Scout.
Scout was tickled to death to see him after being away all summer. She had asked about Mama and Jesse shook his head and said, “No word.”
He sent her out to the car after she hugged and kissed us all good-bye. Jesse assured my grandparents they were always welcome, and that he’d bring Scout to visit when he could. Gram and Grandpa were pleased about that.
“And you,” he said, crouching down to be eye level with me, my heart was hoping that the next words out of his mouth would be, “We want you to come with us if you have a mind to.”
But those weren’t his words.
“You behave your grandparents, and keep up with your good grades. You’re a smart girl, September. I know you’ll have a bright future. Now I’ll keep in touch to make sure you’re behaving, hear?”
I nodded, hoping that I could hold back the tears that threatened to spill. Jesse acted as if he didn’t notice. “I have something for you,” he said, reaching into the pocket of his jeans.
He handed me a small box. Inside was a heart-shaped locket on a gold chain. The locket was the kind that can hold a tiny picture. There wasn’t a picture in this one.
“I reckon you’ll be breaking hearts soon enough. That locket is for you to put a picture of your true love inside, that way you’ll always have him close to your heart.”
He hugged me, and I thanked him feeling like I’d never see him again. I waited until he and Scout where just a spec on the horizon before I went upstairs to my room and let the flood gates open.

“Have you learned your lesson?” he asks.
I moan in response. My mind reverts back to the total pleasure he’s inflicting within my core with each and every thrust.
“We’ve got to be quiet, September. We can’t wake Scout, hear?”
“Are you ready to learn something new, September?”
He placed his hands on each of my shoulders, and gently pressed me down. “On your knees, woman.”
“I’ve missed you, September. You’re not leaving me,” he whispers hoarsely before moving downward, his tongue tracing a hot path across my belly, his fingers plucking at my panties, moving them down over my hips, so that he has full access to my heat.
“Then you’re mine?” he asks, and I can’t think of any better way that he could’ve put that question.
I feel his tongue tracing the shell of my ear, his warm breath caressing my skin. He nips at my lobe, and whispers, “I’ve thought about this all fucking day. About being inside of you, claiming what is mine.”
“Fuck September,” he growls loudly, “Where the hell are your panties?”
“You bastard,” he hisses, standing up as if he’s going to take me on. “What have you done? Seduced my granddaughter? She’s a child for heaven’s sake!” 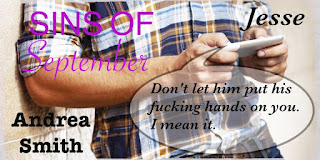 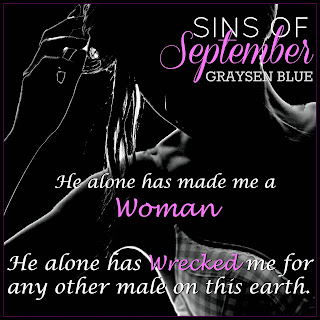 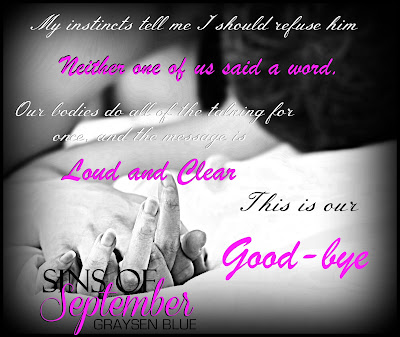 I grab my backpack and head out of my room just as Mama is coming down the hall towards her room.
“Well, I see you’ve gotten exactly what you set out to get, haven’t you?”
This is new.
“Excuse me?”
“Your neighbor, Casey, filled in the blanks for me,” she replies quietly. “You know, I almost wish Mama and Daddy hadn’t found me. Maybe living in ignorance would’ve been bliss compared to this. All these sinners that surround me at every turn, it’s so disheartening.”
And, for whatever reason, I’m determined that she’s not going to get away with hosting a pity party for herself.
I drop my backpack, and cross my arms, staring her down. “You,” I say very succinctly, “don’t get to play victim here, Mama. And most of all, save your sanctimonious bullshit for someone that doesn’t know you like we all do.”
“Why–?”
“No, you are the one that made things the way they are right now. You get credit for that all by yourself. You left Jesse, you left Scout and you left me. You don’t get to waltz back into our lives and expect forgiveness for all that you’ve brought upon yourself and that continues to spill over into our lives and make us miserable.”
“I–I can’t believe you’re talking to your own Mama that way! You sleep with my husband and bring shame upon this family, have you no decency, September?”
“Decency? Decency?” I ask incredulously, “What would you know of decency, Mama? When was the last time you showed any decency?”
She’s glaring at me hatefully now, and then her eyes narrow. “The Bible says ‘to err is human, and to forgive is divine.”
I pick up my backpack and look at her, and I almost feel pity for the person standing there. Almost, but not quite.
“That’s not from the Bible. It’s from a poem by Alexander Pope. And I don’t forgive you, Mama. Maybe God will, but I won’t.” 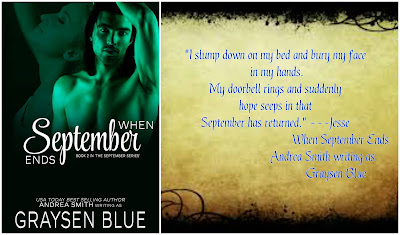 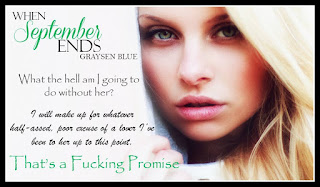 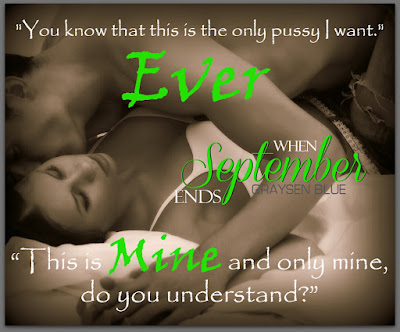 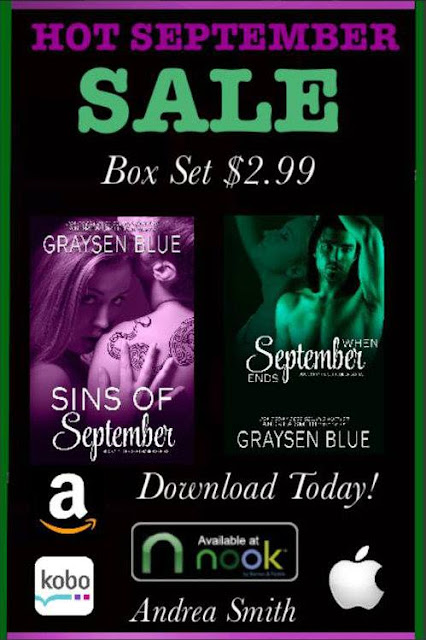 She self-publishes Contemporary Romance, Romantic Suspense, and Sensual Romance with a paranormal twist. She also writes New Adult Romance under the pseudonym of Graysen Blue.

Here is a listing of her published fiction to date:

Silent Whisper
Clouds in my Coffee 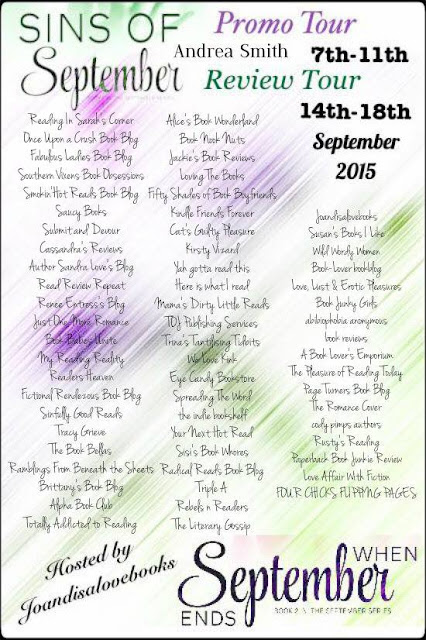 Other books by Andrea Smith: