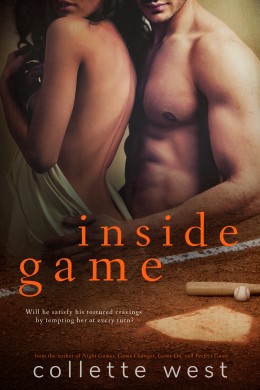 Third baseman Drake Schultz is the undisputed bad boy of the New York Kings. So it’s no surprise when Major League Baseball suspends him for taking performance-enhancing drugs. Furious with their superstar, the front office issues an ultimatum: either work with their sober companion or kiss the rest of his quarter-billion-dollar contract goodbye. Cocky and arrogant, Drake resists being saddled with a live-in babysitter—even one he’s insanely attracted to.

Drake is Eva Sloane’s first celebrity client as a substance abuse counselor, and she knows she’s in trouble when he starts tempting her at every turn. The way he looks at her is as hot as sin, but she refuses to become his new drug of choice. Slowly, she helps him realize he has to face the demons from his past and heal his tortured spirit before he can even think about satisfying any craving he has for her.

Collette West grew up as somewhat of a jock-nerd hybrid. Entering the world three weeks premature, her dad nearly missed her birth because he had seats behind the dugout for a sold-out, highly-anticipated match-up between two of baseball’s biggest rivals. Not to be outdone, her book-loving mom taught her how to read by the time she was three. A love of the game coupled with an appreciation for the written word were instilled in Collette’s impressionable brain from a young age. No wonder her characters believe in the philosophy: sports + romance = a little slice of heaven.

Splitting her time between the Pocono Mountains and Manhattan, Collette indulges her inner fangirl by going to as many games as she can from hockey to baseball and downloading every sports romance novel in existence onto her iPad. When she’s not clicking away on her laptop, she enjoys walking her dog in Central Park, satisfying her caffeine craving at the Starbucks on Broadway and keeping an eye out for Mr. Right. But above all, she loves dishing with her readers. Email her at collette_west@yahoo.com.

She is the author of NIGHT GAMES and GAME CHANGER.