by Brenda Rothert
Pre-Order on Amazon 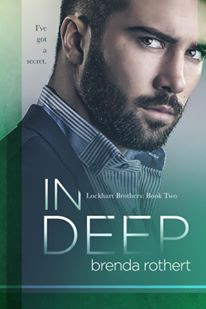 I’ve got a secret.
No one knows how I blow off steam, and that’s how I like it. Most of the time, I’m happy just being part of a big family in a small town. And those times I need to get away are mine and mine alone.
My secret stays safe until I meet her – the woman who simultaneously pisses me off and turns me on. She seems like a wallflower at first, but it turns out there’s a lot more to her than I realized. Despite her hidden strength, she has a vulnerability I can’t resist.
As we open up to each other, I realize she’s starting to mean everything to me. She doesn’t feel the same way, but that won’t stop me from doing whatever it takes to keep her safe – even if it means exposing my secret to her. I’m in way over my head, and all I can hope is that someday, she’ll feel the same way about me.

The moment I saw her, my gut should’ve told me I was looking at a truly amazing woman. That behind the frumpy façade was a smart, sexy gem I’d be damned lucky for even a chance with. But I didn’t get it. There was no gut feeling, no magnetic pull, so I was my usual dismissive, arrogant self. And damn, would I regret it later.

My brother Reed grinned at me with amusement as I set a box on the ground.
“That one too heavy for you, princess?” he asked. “Need me to get it?”
“Fuck off,” I growled. “I was just losing my grip.”
I picked up the box and followed him through a side entrance to Grieves House, the mansion Reed and his wife Ivy had bought last year and renovated into a home for pregnant teenagers. We were moving in the belongings of Ivy’s friend April, who was the new house mom here.
“This one says ‘miscellaneous odds and ends’,” I said, lowering my brows as I read the neat, feminine print on the box. “Who spends this much time labeling boxes when they’re moving? I just throw my shit in boxes and then dig through ‘em when I need something ‘til they’re all unpacked.”
“Just set it by the closet down in her bedroom,” Reed said. “April and Ivy will be back soon and we can ask her if she wants anything moved.”
I grunted and headed for the door to the basement. “Where’d they go?”
“To the diner. Ivy was anxious to introduce April to Margie and Gene.” He opened the basement door for me. “You’ve met April, right?”
I headed down the stairs with him behind me, answering when we’d made it to the largest bedroom in the recently finished basement.
“I saw her at your wedding but never talked to her.”
Reed rolled his eyes with disapproval. “That’s because you brought Marcie Lawson to our wedding. She wore a skin-tight leopard print dress and hot pink heels.”
“Did she?” I scrunched my face in thought. “Huh. I don’t even remember getting her out of that dress after the reception, but I know I did.”
“That’s because you were drunk.”
I arched my brows at him. “You know what I didn’t get her out of? The shoes. That, I remember.”
“April’s most definitely in a classier league than Marcie. She’s a great person. Pretty, too. You guys should go on a double date with me and Ivy.”
I made a low sound of doubt in my throat. “She’s not my type, man. I wouldn’t want to hurt her feelings.”
“You’re type’s a whore, Mason. And you’re thirty years old. When are you gonna grow up?”
I shrugged. “Didn’t think I had to since you and Austin and Kyle are all married with kids. Mom and Dad got the grandkids they wanted.”
“I don’t want you to consider April for Mom and Dad’s sake. You’d be surprised how great it is to date a woman you can have an intelligent conversation with.”
“I’m sure April’s nice,” I said, running a hand through my hair. “And I know I could stand to choose women with … more substance. But I have to feel an attraction, you know? And she’s … I don’t know, kinda mousy. With the glasses and cardigan and long skirt. She looks like a librarian. You know how I am. I’d run over her before she even saw me coming.”
Reed nodded slightly in acknowledgement. “She’s actually quite pretty. You’d know if you’d paid attention to someone other than Marcie at our wedding. But I guess you’re right. I don’t want you hurting her or using her.”
My skin tingled with defensiveness. “Hey, I’ve never used a woman who didn’t want to be used.”
My brother gave a doubtful groan and we silently agreed to disagree. The older we got, the less we came to blows over our differences. I missed the old days, when we’d always settled things with our fists.